I don’t know whether I should file this one under food, preaching, or Bible? Probably it is a little of all.

Let’s start with tacos. There are few things in this world better than a taco. When I say taco most people think about the crunchy things you get at Taco Bell. That hardly qualifies, but it does indeed qualify. I prefer soft tacos–flour for most of mine but if it is a fish taco I prefer a corn tortilla. I also love breakfast tacos made with sausage, bacon, chorizo, or egg and potato. It’s all delicious. 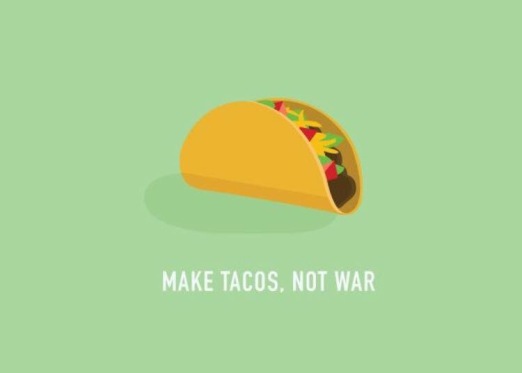 Most food can be described as a taco. This is really true of what we label as Mexican food. An enchilada is a soggy taco. A chalupa is a flat taco. Quesadillas are panini tacos. Nachos are de-constructed tacos. Chimichangas are deep fried tacos.

And for the record, there is no such things as a burrito. A burrito is just a pretentious taco.

But so many other foods are really tacos too. A sandwich is a taco with puffy bread. Think about it, Subway sells things called ‘wraps’ to substitute the fluffy bread, and a wrap is just a taco with different filler. The same is true of a burger–just a taco without the spices, but still a taco.

A hot dog is really a taco, too.

A gyro is a Greek taco.

A calzone is an Italian taco.

An egg roll is an Asian taco.

A kolache is a Czech taco.

I mean, if you get right down to it, a Twinkie is a Mid-Century American taco.

Eventually this gets me to Jesus. Jesus made seven of the apostles fish tacos for breakfast after his resurrection.

Tacos are resurrection food! I wonder if Thomas brought along some guacamole or queso? I doubt it.

Tacos are the universal food. One way or another people from just about every culture can relate to a piece of bread wrapped around something. Jesus offers this universal food to his apostles as he leads them to consider the universal neediness we all have to dine with him.

Yesterday in the Easter Sermon I spent a good bit of time talking about five key verses of scripture from the Hebrew Bible, the Old Testament, that point to a view of life after death. We would rightly call these resurrection verses in light of Jesus and the empty tomb, as well as the explicit teaching of the New Testament, particularly landmark passages like 1 Corinthians 15.

The compilation of these five verses comes from Millard Erickson’s epic theology book Christian Theology, on page 1201 of my copy. It is not in his section on the work of Jesus, but rather on “Last Things” which I find fascinating. So, if you missed them yesterday because you were dazzled by my homiletics (or, like most of the 7 or 8 billion people in the world, weren’t there) here they are.

Erickson doesn’t list Job’s ancient words. I find this to be a glaring omission, for they are the most New Testament sounding of them all and are my personal favorite. As I said, it is part of my funeral liturgy, and for good reason.

“I know that my redeemer lives, and that in the end he will stand upon the earth.  And after my skin has been destroyed, yet in my flesh I will see God; I myself will see him with my own eyes—I, and not another. How my heart yearns within me!” (Job 19:25-26).

I’d like to point out as well that Erickson does in his work what theologians always do–offer serious caution about reading too much into these words. I know where he is coming from, but I think his caution is too strong. The Bible teaches us about Jesus, and though the language is imprecise in the Hebrew texts, it is still applicable and I believe appropriate at Easter.

Tuesday in our men’s Bible study we had a great thought. It stemmed from our discussion of Acts 9:36-43.

First, let’s just talk about how much prettier the name Tabitha is than Dorcas. I mean, seriously. Tabitha is a great name. Dorcas is unfortunate. Click here for more about Tabitha.

But that was not our thought. Our thought came from imagining what Tabitha said or did right after she came back to life. I put forward the hypothesis that Tabitha might have slapped Peter. She was in heaven, with the Lord, perfect bliss, love, and joy. Then she is yanked back to 1st century Palestine. I think I’d hit Peter too.

That was when one of our guys said something like, “Look, guys, if I die, don’t bring me back. Leave me be.”

Then another man said, “I already have one of those, its called a DNR–Do not resuscitate. If I die, no heroic actions to save me.”

Consider this blog post my spiritual DNR. Don’t bring me back to life. Leave me with Jesus. I’ll see you guys on Resurrection Day.

The last two weeks or so this blog has been too serious.  At least, that is what I’ve been told.  That probably has a lot to do with gearing up for Easter.  Which, by the way, we had a great Easter day at our wonderful church—so many great people to celebrate Jesus’ Resurrection with!

But, now for something completely ridiculous.

Ever since the United States began bombing Libya I’ve been pondering this Gaddafi (or is it Ghadafi, or Khadaffi, or Qadaffi—does anybody really know how to spell his name?)  fellow.  The headlines yesterday were that NATO leaders were now calling for strikes to kill Gaddafi and not restrict themselves to military targets.  When I was a boy I remember this man caused problems back then.  I distinctly recall Ronald Reagan bombing him in the early ‘80s or am I wrong?  No, I’m not wrong.  Did we miss?  I mean, Marty McFly took care of the Libyans with a Delorean in 1985, right?

Is it true that his rank is colonel?  Colonel Gaddafi?  It is not general, or admiral or even field marshal?  Colonel?  That means Colonel Potter from MASH would be equal with Gaddafi?  Who would salute whom if Colonel Gaddafi, Colonel Potter and Colonel Sanders were in a room together?  Gaddafi is a dictator, Potter is a fictional character, and Sanders is dead.  However, Colonel Sanders could fry up some mean fried chicken.  I’ve got money on Sanders.  If those three were in a room together you know that Sanders would start frying up some chicken and those yummy biscuits and mashed potatoes from the by-gone days and Potter would start chomping a stogie and eat some chicken and then take a nap.  Gaddafi would be so charmed by the white suit, black tie, walking stick and white goatee that he would lower all his defenses.  Then he would trade away all of Libya to know what those 11 herbs and spices are in the original recipe.

This is probably reason number 823 why I’m not president.  Instead of bombs I would try some KFC diplomacy.  If that didn’t work, we’d then try the navy—we’d send in Cap’n Crunch.  The Libyans might be able to resist Colonel Sanders down home goodness and old reruns of MASH, but I don’t think they can withstand the sugary fake breakfasty goodness of Cap’n Crunch.

Of course, this blog post is ridiculous, and I do not mean to make light of a very dangerous situation.  But doesn’t it seem like Gaddafi is like Charlie Sheen.  I just wish he would go away.