The blending of two different ideas into one new thing is a beneficial practice.  In the food world it gives us cherry Coke, bacon cheeseburgers, and peanut butter and banana sandwiches.  In politics it gives us the occasional pro-life democrat or environmentally conscience republican.  In church it gives us evangelistic Calvinists.

In keeping with that concept, today I am blending two different things.  One is the odd and meaningless fascination with the fact that today is 12-12-12.  So what!  I might be a little more impressed if it was 12-12-1212, as in 1000 years ago but come on guys and girls you know that the dating system is so flawed it is very inaccurate.

But, it matters to some people.  But what  I want to do is combine this with the equally meaningless and mind-numbing preoccupation of far too many folks with the Mayan doomsday clock that is supposed to chime on December 21.  Notice how December 21 is a complete anagram–12-21.  Then you put 12 on the end and it is an anagram of an anagram backwards upside down.  Okay, that might not be completely accurate.  But at 11:34 some digital clocks look like the word “hell” if you turn them upside down.  I know right!  But it makes  the same amount of sense as the Mayans.

I put these two ideas together into the blender called my mind and present to you:

12 Reasons Why The Mayan’s Were (and still are) Wrong

About the End of the World

12.  My birthday is December 29.  The world can’t end until I know what Mrs. Greenbean got me.

11.  Jesus’ birthday is celebrated on December 25, and if I feel the way I do about my birthday (#12), I know he must have some sympathy.

10.  The Mayans were defeated by a conquering force with superior power.  If they were so good at predicting the future, why didn’t they see that coming?

9.  Jesus doesn’t even know when the world will end, and I’m supposed to believe that the Mayans did?

8.  If you read the information correctly, the Mayans don’t predict the end of the world anyway.  They were marking the stars and their movements through periods of time.  This year is as far as they got before their civilization came to ruin (#10).

7.  With the exception of North Korea launching rockets, It seems like the world is pretty normal, with only 9 days left to go.

6.  It will be fun to watch the President and the Congress blame each other for what happens around the whole fiscal cliff thing.  If the world ends, then we will miss that drama.

5.  We have an awesome Christmas Eve service planned.

4.  The end of Twinkies does not qualify as the end of the world, no matter how heart-rending it might be.

3.  The world can’t end if I don’t have the entire James  Bond film collection and Skyfall has yet to be released to DVD/Bluray.  So there is that.

2.  December 21 is a Friday.  Everyone knows the world will end on a Monday.

1.  People who predict the end of the world–whether loons in California, Medieval mystics, or human sacrificing demon worshipers from the ancient Central American past–are, always, 100% of the time, wrong.

Today I finish the review of the top 5 viewed posts from the past year with this one about loons.  Some of you may remember back in the Spring there was a dust up with a group of people claiming the ‘rapture’ would occur the coming weekend.  This is the blog I wrote then.  Turns out, I was right.  This blog has relevance now too, though.  Let me reassure everyone the world will not end on Dec. 21 2012.  There is no way the ancient Mayans figured out something that Jesus didn’t even know, okay people.  If you are a follower of Christ, relax and stop messing around with these crazies. 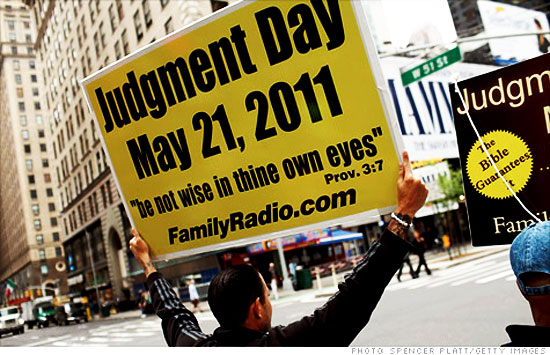 SIX REASONS WHY THE RAPTURE WILL NOT BE THIS WEEKEND

In light of recent headlines, I think it is time for Pastor Greenbean to bring some calm reassurance to the people of the world.  There will be no so-called “rapture” this Saturday.  In case you’d like to bet me on that, you should know I’m going all in:  house, cars, bank accounts, library and stunning wardrobe.

Apparently some loon radio station guy is predicting  that the rapture will happen on Saturday.  Let’s put aside what I consider the questionable theology of “rapture” and just examine the logic of the claim from a foundational biblical perspective.  Jesus himself admits in the gospels that he doesn’t know much about the times and dates of the end.  If Jesus doesn’t know, I’m pretty sure the radio doesn’t either.  Taking logic to the next level it would seem these loons are more influenced by current pagan/heathen/media driven 2012 doomsday predictions rather than anything biblical.  Not to mention (oops, I guess I am mentioning it) history is replete with groups that have been wrong, including Camping himself.  A little research indicates that this man is false teacher.

The way I understand it this group of loons are saying the corollary event, the end of the world, is occurring this October.  Now, unless there are using “end of the world” as a metaphor for a prediction that the Chicago Cubs will win the World Series in October then their timeline is terribly incorrect.  If you believe in a “rapture” (let the reader understand) then the end of the world will take at least 3.5 years to happen, not 5 months.  So these loons at the radio station are terrible theologians and bad mathematicians to boot.  They should never be trusted by anyone ever again.

As an aside, I wish the media would stop calling this guy a Bible expert.  He is not.  He is a loon.  I can only imagine how the early church fathers would have dealt with him.  Can you see it now—Augustine’s “Contra Camping” or Athanasius “Camping est Hominen Stupidem.”  I am so sure the first thing they would have done would be to anathematize him!

Rest assured, the world will not end in October of this year or 2012.  Predicting it almost guarantees it will not happen.  Read your Bible people!

In addition to these sound reasons, I have at least six other personal reasons why I am rather convinced the “rapture” will not occur this Saturday.

1.  By Saturday I’ve ironed out all the kinks in Sunday’s upcoming sermon.  It would be just cruel to have worked so hard to get it ready and then not get to preach it.  Plus, this weeks sermon is awesome!

2.  I’ve got a great vacation planned this summer.  It would be nice if God would wait until maybe the bills come in from my great vacation.

3.  My new study the church built for me last year is barely broken in.  It would be just cruel to vacate it now.

5.  The New Harry Potter movie hasn’t come out yet and my girls would be very upset if they didn’t get to see how it plays on the big screen.

6.  This idea came out of California. California!