Thought One: Protesting is an American right. It has been since the Boston Tea Party. It is woven into our DNA. I don’t protest, though, as I prefer to vote and engage people in discussion. Protesting just isn’t my thing, and I don’t think it generally accomplishes much unless the protesters can organize, network, and plan for real political action at the ballot. Otherwise, it is only an exercise that makes people feel empowered. Protesting does not change the outcome of elections. 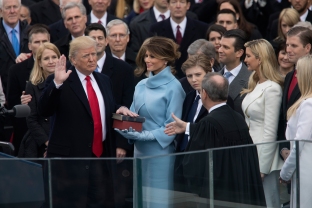 Thought Two: I’m not exactly sure what the SNL writer was thinking when she tweeted that Barron Trump would be a “Homeschool shooter” but children of politicians–especially POTUS, are off limits. It was true of Bush’s daughters and Obama’s daughters and should be true of Barron. The adult grown children who are politically active are fair game, but not an adolescent. That’s just not right. As an example, when Chelsea Clinton was in the White House growing up, it was not right to drag her into political discourse or satire. However, when as an adult she was actively campaigning for her mother, then everything changes. Same for Trump. Barron is off limits. He’s just a kid. Cut him some slack. And stop speculating.

Thought Three: The Missouri State Chorale was awful. Just awful. It might have been the song choice, to be honest. Someone on Twitter had the best line–comparing the song to the theme music from The Omen. Not a good sign. Not a good song. Seriously. Listen. If you dare.

Thought Four: I hated the way the prayers and readings were done at the Inauguration. It looked to me like the program just said “sprinklings of God stuff here” as they stacked them up by threes in two different places. It felt lazy and unorganized. For the record, whenever a future POTUS asks me to read Scripture at his/her inauguration, I plan to read 1 Samuel 21:15.

Do I lack madmen, that you have brought this fellow to behave as a madman in my presence?

Thought Five: What was up with the press briefing on Saturday. Newsflash to the Trump Administration–specifically the Press Spokesman–You won. You’re the President. You don’t need to prove anything to anyone. It doesn’t matter how many people showed up for the inauguration–You won. You need no more validation.

Thought Six: It looked like George Bush was having the best time of anyone at the event. Trump looked sullen. Obama looked anxious. Clinton, well, he kept staring at Melania. Seriously, did you see that shot of Hillary catching him looking? And if you’re wondering, that is precisely why some people voted for Trump. They remember President Clinton and didn’t want his presence anywhere near government.