I have plumbed the depths of the interwebs, and found this gem.

It is called the Mandela Effect.

Until last Saturday I didn’t know that was a thing.

Here is the basic gist. People remember the past differently. Apparently large groups of people. The prime example is the death of Nelson Mandela–from which the name comes. Mandela died in 2013 (at least in our timeline) but many people report his death in the 1980s while still in prison. Their memories include television coverage of the funeral. The explanation for this difference in memory is that there are alternate, somewhat parallel universes, that have crossed over into each other.

People who remember Nelson Mandela’s funeral in the 1980s are from a different universe where he did actually die in the 1980s. That would be a very sad universe indeed. 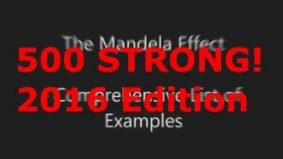 There are host of things Mandela Effect people point to. Confusion about the name of the Berenstain Bears (Berenstein Bears) is one. Froot (Fruit) Loops is another. So is a portrait of Henry VIII holding a turkey leg that apparently never actually existed, except a lot of people remember it. I mention this one, because I am one of them. I distinctly remember learning about Henry VIII in school and seeing that portrait.

The concept was first introduced by Fiona Broome in 2010. Click here to visit her website. Better yet, google Mandela Effect–That’s how I got sucked in. Believers in this theory point to these remembered differences as proof of parallel universes with a leaky valve.

One theme on this tangent is that the leaky valve is caused by CERN–the large atom smasher in Switzerland.

Do I believe in the Mandela Effect?

Of Course not. Don’t be ridiculous.

I don’t think I lived in another universe where there was a portrait of Henry VIII with a giant turkey leg. I think I misremember it because of a television show, a bad textbook, or a misprint. Mandela Effect believers remind me of those Ancient Alien people. They have some data right–people misremember things, there are odd artifacts–but they come to the wrong conclusion about what caused it.

The value of the Mandela Effect for me, though, is the possibilities for science fiction. I bet someone has already gotten there ahead of me, but I see a great treasure hoard of material in the idea of sliding in and out of universes. Some of this has been done, of course, in big ways like Star Trek, 12 Monkeys, Asimov and Philip Dick, but I think the surface is only being scraped, especially if we think about large groups of people with different histories–What joyous conflict could be hatched, for example, if some people remembered the U.S. losing the Revolutionary War, while others remember our current history? Or Hitler. Or Shakespeare?

Oh, that is good. Someone who loves Shakespeare, but then realizes she or he is in a universe that never had Shakespeare.

Yeah, that is what I’m talking about. *rubs hands together with glee, then stares out into the distance with a far-away look in his eyes*