Some people love it.

Some people hate it.

I lean toward the love it side. I think putting Harriet Tubman on a piece of currency is a good idea. 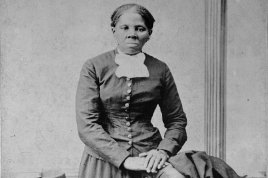 I do feel a little, though, that by putting a black woman the Treasury is crossing off two minority groups with one choice.  Martin Luther King, Jr. is relegated to the back of the $5 bill. Think about it–the back of the bill.  Somehow that is wrong. I don’t see any Asians, Native Americans, or Latinos on the currency. How cool would it be to put Quanah Parker on a $50?

I also don’t like replacing Jackson on the $20. The hero of New Orleans shouldn’t be eliminated that quickly. A better solution might be to add new bills. We need a $15 bill.  We need a $25 bill too. I also think we could use a $7 bill. I say leave the older notes alone and instead make new ones, then phase out coins. It is coins we really don’t need.

I don’t know why we can’t use multiple images for dollar amounts. For example, the $100 note could have some with Franklin, the traditional note, but then some printings that have Martin Luther King, Jr., then others with Quanah Parker.  Right? Why do we have to choose one, and only one?

And while I’m at it, stop messing around with the colors–and I mean stop adding more color and more flourish. The greenback is less and less green every day. U.S. currency is beginning to look like monopoly money. Let’s just hope it doesn’t share the same value as monopoly money.

I’m curious, who would you like to see on money?

2 thoughts on “SPOT ME A TWENTY, HARRIET”