Yesterday I posted the following on the Facebooks 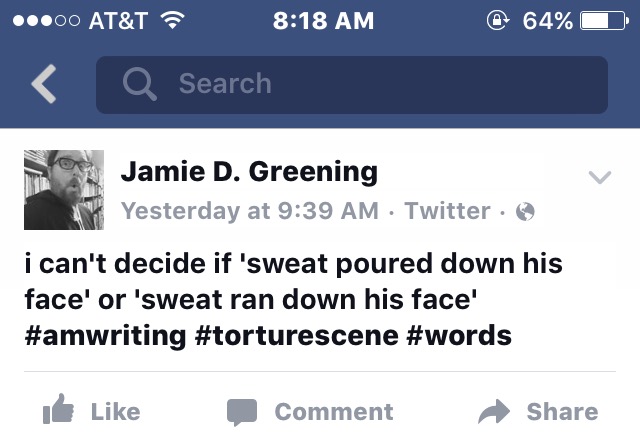 It wasn’t long before many of my FB friends had ideas. At first it was helpful suggestions–people weighing in on whether they preferred “poured” or “ran” in the sentence. It wasn’t long before I was getting full fledged sentence ideas, complete with metaphor and plot devices. My post had turned into a writing prompt.

He sweat like a fat man chasing a donut through the Amazonian jungle.

Another friend channeled the classic film Throw Momma From the Train and suggested, “It’s sultry in here.” That would make the whole thing moist.

A wordy pastor friend of mine suggested the interjection of a medical condition, writing the sentence as,

It wasn’t the first time he was thankful for being born with anhidrosis.

The concept took a bizarre turn when someone suggested he word “glisten” in order to make the torture scene sexy, then this decidedly romantic idea was postulated by a friend from New Orleans:

He glistened as sweat poured down his face. His sultry eyes took long pauses when he blinked as he inhaled deeply to slow his racing heart.

A Star Wars fan tapped into the zeitgeist of the times and wrote,

Waving his hand like a Jedi Knight, ‘this is the phrase your shooting for.’

Then, the donut Amazon writer friend chimed back in with this gem:

Sweat shot from his face, head and back, like a fire hose in a five alarm fire, knocking everything down, drowning children and small woodland animals in the process.

How about this other one,

he sweat like a sieve held under a waterfall after a heavy rain.

Another writer friend took the time to send me an email suggestion.

Beads of sweat attacked his face like the rage of a thousand angry, wet dentists.

I never knew that tortured sweat could be so much fun.

In case your wondering, here is the way it currently looks in the WIP, which is part of the finale for my Deep Cove series–of which there will be big news in early spring. Keep in mind this is the WIP and not the final product.

Without saying anything else, Finn opened the door so quickly that it startled both Jack and A-Jay. Agent Finn swept into the jail cell and was on top of the prisoner with his knee in the chest of his target. From his coat pocket he produced something that looked like a ballpoint pin. He jammed it into the prisoner’s side. The victim began to shake, only slightly at first but then with the force of a major epileptic seizure.
Finn pulled the device away, then he brought the back of his hand hard against the victim’s jaw.
“Now, what is your name? What are you doing here? Are there any more with you?”
Sweat covered the prisoner’s face. His teeth rattled.
From where A-Jay was she thought his eyes were rolled back into his head. It occurred to her that she should intervene, but then, she was not in the best position herself. She felt vulnerable, and that was a feeling she didn’t like.
Finn yelled, “Answer me!”
There was a momentary silence. The prisoner grunted, then looked Finn in the eyes. In perfect English he said, “I will never tell you anything.”
“I believe you,” Finn said, jamming . . .

You’ll have to buy the story in March to find out more.