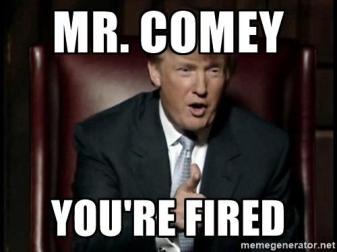 So . . . did you watch the news last night. We got in from watching Guardians of the Galaxy Vol. 2 (Click here to read my review)  and I turned on the news to see if the world was still there and discovered the media in an out-right panic. POTUS fired FBI Director James Comey. It is perfectly within his power to do so, but everyone was aflutter—some were rushing to condemn the action, others rushed to praise it. Here are 10 thoughts I have.

One thought on “10 Thoughts On Comey’s Firing”