I’ve read a lot this summer, and intend to post reviews of some of it. Let’s start with the debut novel of Joseph Courtemanche titled, Assault on Saint Agnes.  It is in the thriller genre, but also carries some classic spy motif that we all love and enjoy. The book also contains a Christian worldview, but I would not put it in the category of typical Christian fiction, because it is better than most (This is where Greenbean uses air quotes) Christian fiction. 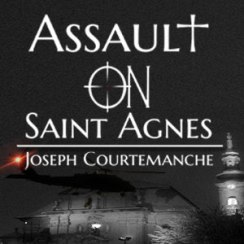 People who like action, details, espionage, power figures, covert actions, good guys versus bad guys, fighting terrorists, and anyone with a military background will enjoy this book. It features the area around Minneapolis heavily, so anyone in that area or from there might enjoy the book just for the geography.

WHAT I REALLY LIKED

There were two things I really liked. The first is Courtemanche’s knack for describing something using simile and metaphor. Here is a sample: “Grace Kurtz looked like she’d been mugged by a psychotic hairdresser.”  That line made me laugh out loud, mostly because I think I’ve been mugged by a psychotic hairdresser before, but also because it provides a type of foreshadowing of the kind of ‘crazy’ Grace is about to get into.

The second thing I loved about this book is the development of the characters.  The MC, Bobby Kurtz, is not static, but instead changes. Dramatically. Novels work best when the MC goes through an evolution or change, and Bobby certainly does, in more ways than one.

First novels tend to bog down as writers reveal their amateur status by chasing unnecessary details, characters, or false-plots. Courtemanche avoids these with the skill of an experienced storyteller. The pacing is crisp, on point, and directed at the reader’s interest, not the storytellers hobbies.

Another thing I liked about the story is the mechanics of detail that are given. It is not over-the-top like a Clancy novel, but instead it has the kind of solid gunmetal feel of a classic Ian Fleming James Bond novel. The weapons and tools are not magnified or given mystical qualities. Instead they are described as instruments of death, for both good and bad.

The things I didn’t like are minor, but they did bother me a bit. I didn’t like the layout of the book–especially the listing of the location and military time at the top of each chapter. I also didn’t like the chapter lengths. I think Courtemanche could have done his reader a favor by compressing some of the chapters together.

Another thing–I didn’t realize what kind of book I was reading at first. The title and cover image leads the reader to believe that the entire story is about the actual attack on the church. However, that is only the introduction to the action. This story is not a singular terrorist attack, but instead a drawn-out timeline that is more like the French Connection than Die Hard. Don’t misread me, I loved the story, but it is not the story I thought I was reading and that caused me to change my mental interactions with it about a third of the way through.

I really liked the book, and I recommend it. It was a quick read. The subject matter made me think seriously about big picture issues, and it entertained me. I loved the characters, and anxiously await the next installment, which, rumor tells, is in the works. It is safe for teens, but not younger children. There are no profanities or gratuitous sexual descriptions, but there are some troubling scenes of torture and sexual abuse in the book.