Tonight I popped me a bowl of popcorn and turned on the television to watch the State of the Union address by President Obama.  I’m no political pundit, but I am someone who speaks publicly often (well, actually, weekly) and so I watch these things with the eye for the effect and style as much as substance.  What I noticed about the flow of the speech is that it started very slow and very wonkish but constantly and steadily increased in rhetorical flare as the monologue progressed.  I’ve broken my evaluation down simply into what I liked about it and what I didn’t. 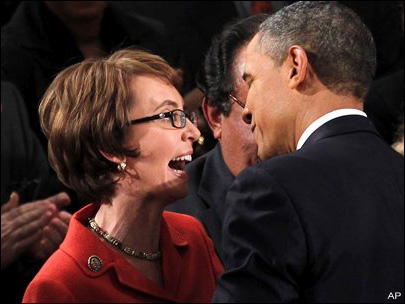 The best moment of the evening, for me, was before the speech ever began.  When Gabrielle Giffords came into the room, and then Obama hugging her, was special.  That tugged at me at a level that goes beyond politics, beyond patriotism, and into the human and spiritual realm.  That actually is an image I will retain for a long time.  It reminds me of when Bush (43) in one of his State of the Unions announced a massive AIDS spending initiative for Africa.  Obama and Giffords will last longer in my memory than any of the particulars of the speech.