I’ve finished three different books in the past week. And yes, I don’t think you could find three more distinct and different books–not only in subject matter but in style and genre. The first is a history book about the Texas Rangers, the second a weird Star Trek book, and the third is Parker Palmer.

I bought this book at a great book store in Kerrville and looked forward to reading it for a long time. The history in these pages is wonderful. I wish the authors would have gone into a bit more detail about some of the individuals and escapades, but their intent is more of a survey than specifics. The main problem with Lives, Legacy, and Legend is at times the prose is not quite clear–as the authors seem to try and write paragraphs in the most muddied way possible to demonstrate their clever way of saying common things.

There are also a lot of digs against “Political Correctness” which I never understood in the text. One reference to it is an indulgence. Two references are pushing it. But by the seventeenth time the authors remind us that political correctness and modern sensibilities have no place in studying Ranger history, the point seems belabored.

There are some great photographs and primary documents, which alone is worth the price of the book. 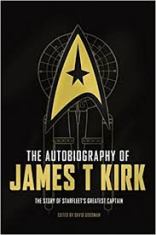 The Autobiography of James T. Kirk: A Story of Starfleet’s Greatest Captain ‘Edited’ by David A. Goodman.

Two things up front: I enjoyed this book and laughed out loud several times. Also, it is a quick, easy read, unlike the Texas Rangers book, which is slow, plodding and laborious. The problem is, I think I enjoyed the book because I enjoy Star Trek, and the writer clearly does as well. But I don’t think the book is that well written.

The best are the early pages where we learn things about James T. Kirk that aren’t covered in the television shows or movies. But about sixty percent of the book is really lame plot summaries of shows. Yes, we get Kirk’s perspective on those things, but nothing  really new is brought to the table.

But the book is funny. That should come as no surprise because it is written by Goodman, called the ‘editor’ on the book cover, who wrote for Family Guy and Golden Girls. What it lacks is emotional depth. The book was given to me as a gift for Christmas by a kind friend, and I looked forward to reading it, thinking it would give more character depth about the famous alpha male. But nope. Goodman is funny, but he is not that good of a writer. He does more ‘telling’ than ‘showing’ and as a result he leaves Kirk shallow.

There are two things that will stay with me a while, though. The first is how Goodman ‘washes’ over Star Trek V: The Final Frontier, the movie almost everyone agrees is the worst ever. It is quite clever, and I must say I like it. The second was this line thrown in to describe the mind-numbing administrative work of being an Admiral that Kirk hated.

Of course the Obama was over budget and behind schedule. Of course it was.

A Hidden Wholeness: The Journey Toward An Undivided Life by Parker J. Palmer

I’ve read Palmer before, but not this book. What interests me is that I think Palmer believes he wrote a how-to book, when in reality he wrote about the inner voice, overcoming our fears and paranoias, and the need to learn to trust.

The format of the book is laid out as the steps to forming circles of trust. A circle of trust is a group of people who dedicate themselves to allowing people to hear their own soul in protected communication. It is good material, and I recommend the book to small group leaders of any kind, because the principles he shares are nearly universal.

The book is a gem, but what will stay with you for a long time is the story of the woodcarver. I’ve seen Palmer use it before, but I think his exposition of it in this text is his best.

Of the three books I’ve shared about, this one is the most vital; it is the one I think everyone would benefit from.

One thought on “Texas Rangers, Captain Kirk, and A Reflective Quaker”