My second most viewed blog of this year was a book review of David Platt’s “Radical.”  I read a lot, and at one time I considered making this blog a book review site.  I am certain the hits I got on this review are due solely to the popularity of Platt’s book.  However, there are other books I would recommend way ahead of Platts.  You can click here, here, and here to find other reviews.  Oooohhh, and don’t forget about that other one (click here).

I can usually get one whole book read on the to-and-from legs of a flight to the other side of the Rocky Mountains.  This particular trip I read David Platt’s Radical.  While I was lining up at the gate, waiting for my boarding group, I took his book out of my satchel and tucked it under my arm.  That way I could throw my satchel in the overhead and keep the book with me.  While I stood there, three different people came up to me and said, “I see you’re reading Radical.  It’s a good book.”  On the actual flight I saw another woman reading Radical.  I have not seen that with a Christian book since Don Miller’s Blue Like Jazz.  I expect it with Twilight garbage or Harry Potter escapism, but not Christian nonfiction.  So since everyone seems to be reading Platt, I thought I would throw in my observations about his book. 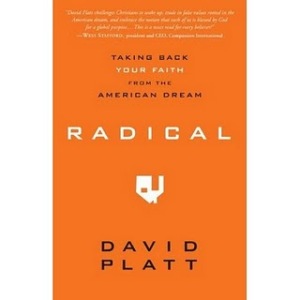 All in all, I highly recommend Radical as a read that will challenge a person to be a better Christ-follower.  If that is your goal, then read Radical.  If you are sensitive and don’t take someone meddling into your life very well, then by all means, do not read Radical.